What is a Motor? 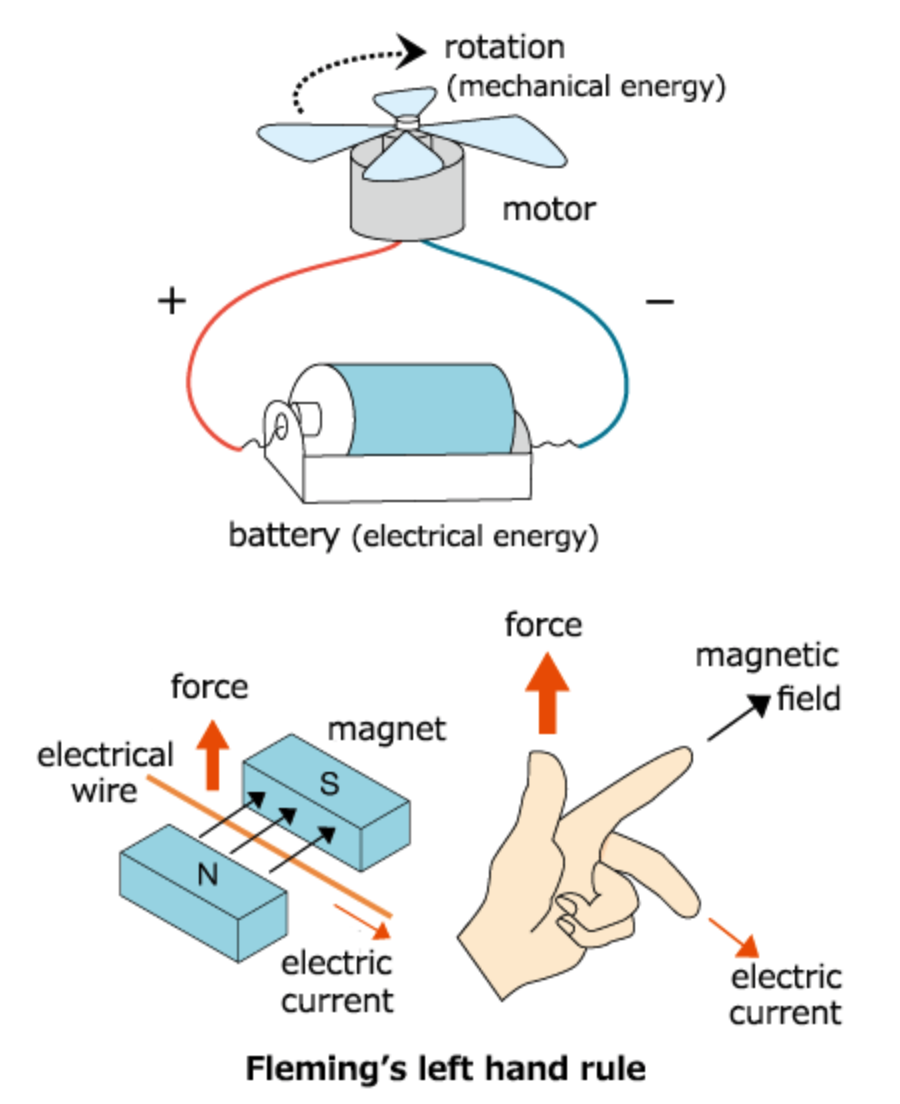 The beginning of motors

In 1831, a British physicist, Michael Faraday, discovered the law of electromagnetic induction that electric current flows when you move magnets in air core coil. The law of electromagnetic induction proved that the electrical energy and the mechanical energy are mutually convertible. It is said that this is the catalyst of invention of motors. In those days, Great Britain was in the period of the first Industrial Revolution and steam power was the driving force of the revolution. No one could recognize the importance of motors which worked with electricity in those days without power network. 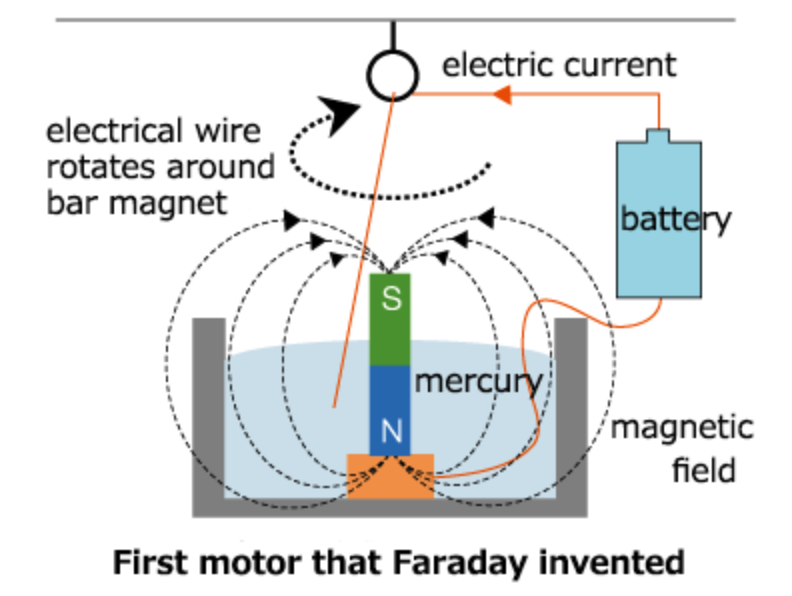 Since the discovery of electromagnetic induction by Faraday, people had invented a number of motors. In 1834, Thomas Davenport invented a practical DC motor. After that, a Yugoslavian electrical engineer, later became an American, Nikola Tesla, came up with an idea to drive motors with alternating current. In 1882, the idea of the principle of rotating magnetic field suddenly hit his head when he was walking in the park. In 1887, he completed a practical two-phase AC motor (induction motor) using rotating magnetic field. Since then AC technologies such as transformer, three-phase-three-wire system have developed as well as power network. The more available the electricity became, the wider the usage of motors expanded.
Thanks to Tesla’s breakthrough, now we are able to enjoy our lives with electricity and motors. By the way, Tesla once worked for the company run by the great inventor Edison, he came into collision with Edison and left the company within one year. Tesla left words cynically twisting Edison’s words as saying, “Genius is 1 percent inspiration and 99 percent vain effort”. 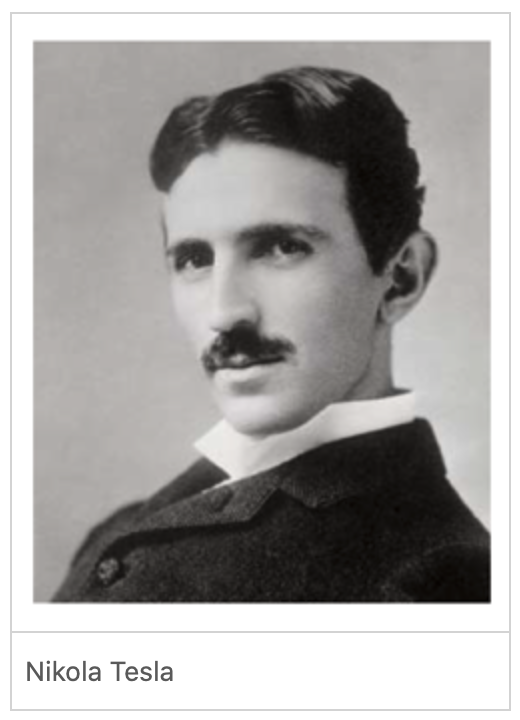 Domestic production of motors and departure of Yaskawa Electric

It is said that the first motor used in Japan was for an elevator (accommodated 15-20 people, operated up to the 8th floor) in the Ryōunkaku, the first western-style skyscraper in Japan, opened in 1890 in the Asakusa , Tokyo. Not to mention, there was no such a technology to design and manufacture motors in Japan, the elevator applied a 15-horsepower motor (DC motor) purchased in America. Although it is alleged that the elevator ended its operation within 1 year due to frequent breakdowns, it became an episode that demonstrated people’s challenge spirit toward motorization.
In 1890s, the use of import motors started in Japan such as for pumps in mines. Since the industrial technology level in Japan in those days was quite lower than that in Europe and America, most of electric devices were imports. However, it is said that they frequently became out of order. So, domestically produced motors gathered momentum gradually.
In 1895, the first motor (induction motor) produced in Japan launched. Then, in 1915, Yaskawa Electric was established as a company which manufactured and sold electric products purely produced in Japan and launched the first order of induction motor in 1917. With that as a start, coal mine operators started to place orders of Yaskawa’s motors for their pumps and haulages. 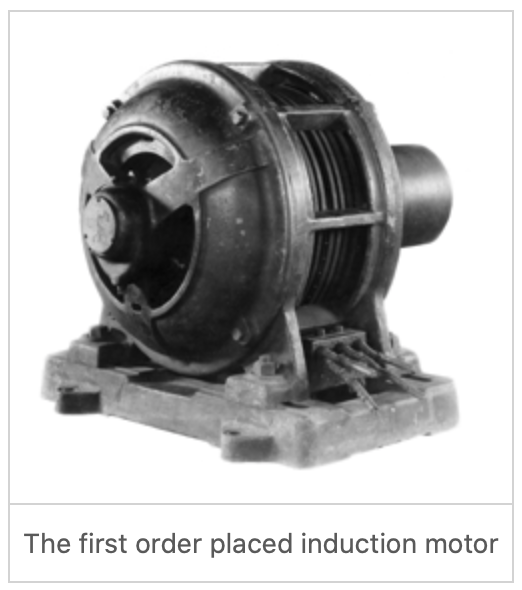 Various kinds and features of motors

180 years after the birth of motors, its performance and usability improved significantly thanks to the progress in designing and manufacturing technologies and material technology as well as electronics. There are various ways to call motors depending on the categorization of functions and structures such as a servo motor for its precise work toward commands, a linear motor for its linear movement, a vibrating motor for its vibration to notify incoming call on mobile phone and a geared motor for combined speed reducer. Motors also have a few names although their structures are the same. Starting with a motor for coal mine, now that Yaskawa Electric’s motors expand the usage to wide-ranging fields such as industrial machinery, robot and electric vehicle (EV). For example, the list below shows a few names used in motors for EV. People named motors to define the differences from others, resulted in leaving with many names for motors. It is such a complicated background but also a “proof of motor’s diversification.”

DC motors flow direct current (DC) through it, besides AC motors flow alternating current. A brushless DC electric motor is a DC motor which replaced its brush and commutator with semiconductor switching element. A universal motor is able to rotate the motor in high speed with AC 100V electricity for households while holding the same brush and commutator for DC motors. Other than these, there are a stepping motor that moves with square-wave current flow and a switched reluctance motor. An ultrasonic motor is a special motor that works by vibrating piezoelectric ceramic with applying high frequency voltage. 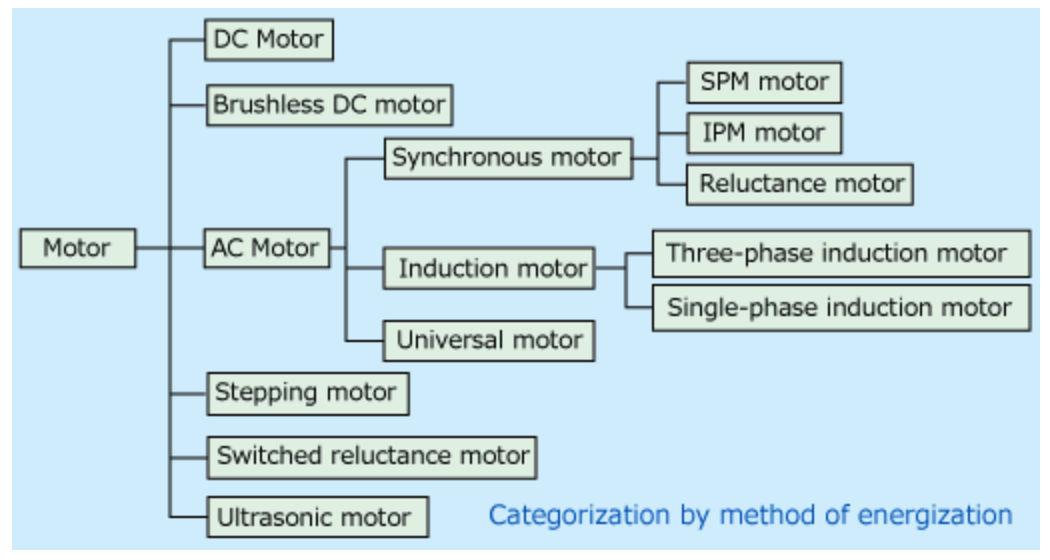 The motor which many Japanese pupils used in their science experiments when they were in primary schools was DC motors. It is the most popular motor used in models, consumer electronics and vibration motors in mobile phone. To explain roughly about the structure of motors, there are rotor and stator in it. Rotor is a part connected to shaft, and stator is a fixed part which comprises the exterior.
The stator in DC motors holds permanent magnets and brushes that supply electric current to the rotor, and the rotor holds windings and a commutator. Once the brushes supply DC current to the commutator, electric current starts to flow through the windings connected to the commutator and generates torque. Here, the windings and the commutator have a mechanism to flow electric current in the way that torque keeps the same level. The greatest feature of DC motor is its usability that works with dry cell. You can change the direction of rotation by just changing the connection of motor wires. This is why DC motors are widely accepted.

You can describe a brushless DC motor as “a motor without brushes while it has a feature similar to a DC motor.” It holds windings in the stator and permanent magnets in the rotor as its structure. It doesn’t have brushes and a commutator which DC motors used to have, instead it holds a semiconductor switch element outside the motor. It works to flow DC current all the time through two out of three phases of windings, phase U, V and W. It switches the current flow according to a permanent magnets’ position detected by such as a hall element sensor and keeps generating the same level of torque.

The rotation principle of induction motors is based on the “Arago’s rotations” discovered by a French physicist Arago. It is a phenomenon that when you put an aluminum disc between a U-shaped magnet and move the magnet toward the rotating direction, then the aluminum disc starts to rotate in the same direction with a little time lag. When the magnetic field from the U-shaped magnet changes on the aluminum disc, a spiral electric current flows through the aluminum disc (the law of the electromagnetic induction), and the action of the current and the magnetic field of the U-shaped magnet generates the electromagnetic force. Induction motors are the invention applied the Arago’s rotations.
The stator of induction motors holds three-phase windings in its structure. And the rotor holds cage-shaped aluminum part (case-shaped conductor). When you drive the three-phased windings in sine wave, it generates a magnetic field which rotates at the frequency. Then, as in the principle of Arago’s rotations, electric current flows through the squirrel-cage conductor which receives the changes of the magnetic field and the rotor starts to rotate with a little time lag.
Induction motors are less efficient compare to brushless DC motors and synchronous motors which use permanent magnets, however, they have other features such as they are applicable to the three-phase AC 200V commercial power source, possible to rotate without a hall element sensor or an angle sensor, hard to break, possible to operate efficiently with AC Drive and capable of large output with large-sized motor. Therefore, there are many use cases of induction motors in industrial area and vehicles. Similar to biodiversity, we have variety of motors which have a wide range of nature depending on the difference of the structures and distribution of materials. 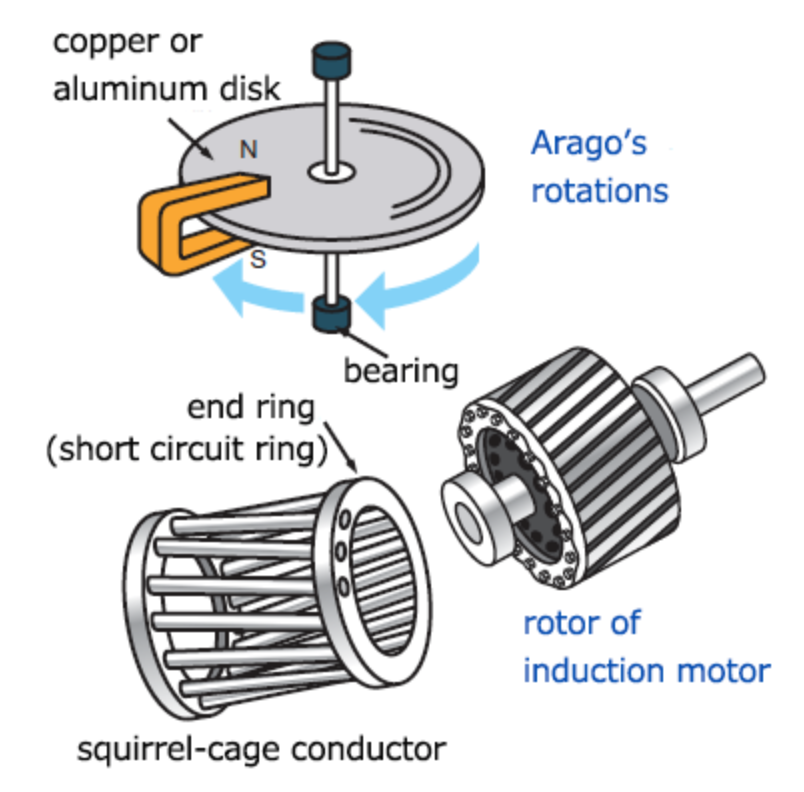